The So Hum mantra (also called the Soham or So Ham Mantra) is one of the most popular mantras. The phrase has been used for thousands of years in many Eastern religions and meditation practices, but has recently gained popularity in the Western world as well, thanks to its simple structure and easy pronunciation.

Om So Hum: How To Use The Mantra

This mantra is used in two basic forms. The first is simply to use the ‘So hum’ words repeated many times in a cyclical structure throughout your meditation practice.

The second style is to incorporate an ‘Om’ sound in between the ‘So hum’ cycles. Either approach can be a very powerful practice. 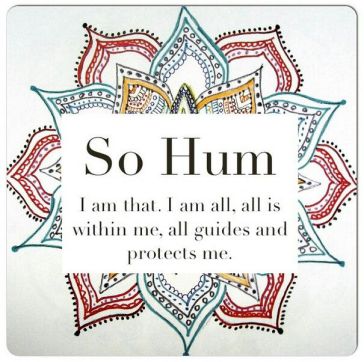 The word Om refers to the sound of the universe. It is the most basic sound that, according to Sanskrit traditions, represents the entire universe in a single world. Using this word in a meditation or mantra can invoke the feeling of unity and oneness with All That Is.

So Hum literally translates to “I am that.” Thus, repeating the phrase in your practice helps to center you into the feeling of interconnectedness even further. This is why the two phrases are often used together, and create a unifying effect.

When using the sohum mantra in meditation, play with the idea of connecting the two halves of the phrase to your breath. For example, I like to inhale to the thought of so, and exhale to the thought of hum. I find this allows me to engage with the words in a nice, even rhythm. After a few breaths of this, my mind relaxes, and I allow my breath to flow evenly, regardless of the word I am repeating.

You can also use this mantra outside of the context of your meditation. As you go about your day, take the time to center yourself in your breath, step back from your circumstances, and remind yourself that regardless of what appears to be going on around you, on a very real level, you ARE the thing that is happening.

You are one with the universe. You ARE the person in front of you in traffic, the angry boss and the screaming baby. By repeating this mantra during the day, you remind yourself that you are connected to everyone, and you can more easily remain in a state of peace, joy, and bliss, despite the challenges you may be confronted with throughout the day.

Why Use This Mantra?

So Hum and Om So Hum are great beginner’s mantras for anyone new to working with repeated phrases. It is short, easy to remember, and easy to pronounce, which makes it a great phrase for people of any language. There’s no need to work through complex Sanskrit spellings or pronunciations.

That said, no mantra is a “beginner’s only” idea. Ancient yogic and Buddhsit traditions assert that any single idea, when repeated, has the power to unlock the secrets of the universe. Since this mantra translates to repeating that you are One with All That Is, it’s a great phrase to help you towards your enlightenment.

Like any mantra, the power of this mantra comes through repetition. Using it in one meditation and then never coming back to it is a sure sign of failure, or distraction. At first, using the mantra may feel awkward or perhaps even uncomfortable, but when you repeat it over time you can allow yourself to receive the full benefits.

Since this phrase has such an ancient history, there is a lot of energy connected to it. That’s why I often recommend that people invoke the original Sanskrit, rather than the English translation (I am that.) The literal sound of the word includes a specific energy with it, and that’s the energy you want to access through the Om So Ham mantra.

There are many great recordings of this mantra that you can access for free. Finding the right meditation audio is about finding the sound that works for you. I’ve included two of my favorite recordings here to get you started. The first is a beautiful, elongated chant sung by a full choir and set over a lush string background sound.

The second is a guided meditation that walks you through using this mantra in a seated meditation practice. They’re both great backgrounds for meditation, so I hope you enjoy them!

So Hum Meaning: Hindi and English

There are several variations of this phrase, including: So Hum, Sohum, Soham, So Ham, Saham, and is sometimes inverted as Hamsah. When the phrase is altered slightly, it can also translate to: “I am the Swan,” as is the case in so ‘ham hamsah. In this variation, the Swan refers to Atman.

The phrase is originally found in the Upanishads, such as Verse 16 of the Isha Upanishad, which reads:

“The light which is thy fairest form, I see it. I am what He is“

There are many so hum meditation benefits. In a single session, practicing this mantra can cause you to feel centered and in touch with the world around you. It can be used to clear negative health problems, or to help you to focus on your aims and make important decisions.

The real benefits of soham meditation, however, come over time. When you practice this mantra consistently, you empower yourself to begin to notice the intricate connections that exist in the world around us. You will start to see yourself as a part of all those you come into contact with, and, as a result, can become more compassionate, more understanding, and more loving.

Furthermore, you can use this mantra outside of your meditation in order to cultivate a renewed sense of peace and oneness anytime a stress trigger arises in your environment.