How To Do A Tratak Sadhana Meditation

Trataka meditation, also known as a tratak sadhana or candle-gazing meditation, is a meditation technique in which the practitioner center his focus on a single visual point.

The point may be an image, a word, a symbol, or even just a dot on the wall. The idea is to allow the gaze to soften and rest gently on this point, so that the mind can relax. Candles are a particularly powerful object to use, because the soft flicker of the candlelight has a natural lulling motion that allows the individual to relax more easily, as if in a trance-like state.

The goal of tratak sadhana is to enter samadhi – an intense, focused concentration – by raising the energy in the sixth chakra, located at the third eye. This center is the chakra aligned with one’s vision, both physical sight and internal vision and intuition. Thus, resting the eyes softly is said to induce higher activity in this region.

Like many meditation techniques, there are a number of common variants. Most commonly, the focal point is set at eye-level, three to four feet in front of the practitioner. Another common variation is for the focal point to rest on the floor a little further away, between one and two meters from the individual.

A secondary aim of candle-gazing meditation – or simply relaxing your gaze on a single point – is to develop the solar plexus in the third chakra (naval center). There are strong associations between the 6th and 3rd chakra centers, so as one gazes at the candle or image, he can more easily build a feeling of warmth and inner fire in his abdominal region.

Tratak sadhana is also a common practice in yoga. Commonly known as drishti, the technique is applied in yoga not as a specific meditation, but as a focal point to help the individual maintain balance.

Drishti refers to a single point of focus, which, again, may be on the floor or on a wall slightly in front of the individual. Maintaining this focus through a yoga sequence helps the individual to maintain balance. Thus, the technique is particularly popular in balancing postures such as Vrkasana (Tree Pose), Garudasana (Eagle Pose), Ardha Chandrasana (Half-Moon Pose), and Virabhadrasana (Warrior Pose), among others.

The Benefits of Trataka 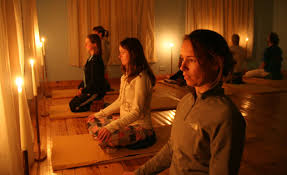 This technique has a number of well-established results and positive effects. The primary benefit of trataka meditation is an increased ability to concentrate, both during meditation and throughout other daily tasks.

The improved concentration occurs in two ways, as the individual develops both an increased capacity to maintain focus for longer periods of time, as well as an ability to enter into a state of deep focus. This level of concentration is commonly associated with clearer reasoning faculties and an ability to make effective decisions.

Gazing meditations have also been shown to improve memory and recall, as they cleanse the cerebral cortex, helping to decrease anxiety, relieve depression, and promote deeper, more relaxed sleep.

According to yogic traditions, the practice also helps to relieve eye tension and may be a factor in curing diseases related to eye fatigue and poor vision, though this has not been confirmed.