How To Practice Your Way Out Of Procrastination 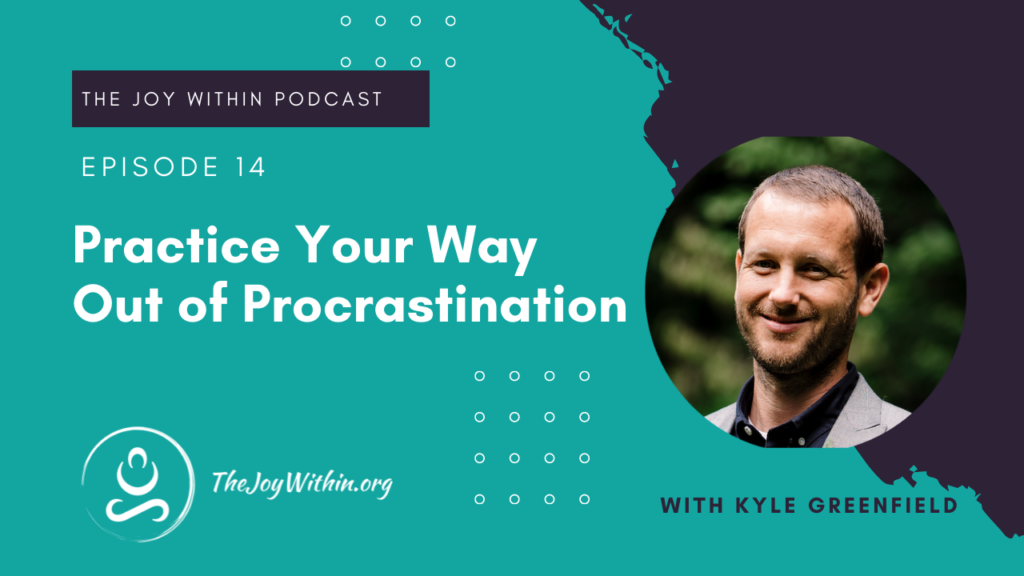 Hello and welcome back to The Joy Within’s podcast. Today I want to share a mental hack that you can use to help get over procrastination, whenever the reason you’re procrastinating stems from a limiting belief or a fear of some sort.

Now, I know that isn’t the only reason you might be procrastinating – I mean sometimes you might be putting something off just beause it’s boring, or it’s something you don’t like doing, for example – but, I actually think that most of the time we procrastinate because of some limiting belief or mental block that we might have – and the great thing about this approach I’ll share with you is you don’t even need to know what that mental block is for it to work.

And, it’s really simple. Whenever you feel stuck on a task, whenever you keep putting something off, work on shifting into the mindset that you’re just practicing. Pretend that it doesn’t count, that it’s not for real, or that you’re just preparing, just getting ready to do the actual task.

Now this can take a lot of different forms. It might just be researching, learning, reading up on what you have to do. It might be jotting down a few notes, just brainstorming ideas or getting an outline in place. It might be writing a first draft. It might even just be playing with different ways you could break the task down to make it easier or more manageable.

The point is: whatever that first step might be, treat it with the mindset that you’re just practicing. Do something that is leading towards the task you’ve been avoiding, but might not be the main task itself.

This small shift in mindset can be incredibly powerful, for a few reasons. Firstly, it takes the pressure off. I think a lot of us don’t realize just how often we unconsciously stop ourselves because we’ve built the task up in the back of our minds. We think it’s bigger than it has to be, or more important than it really is. When we do, we start to think that we absolutely cannot fail, and that fear of failure drives our unwillingness to take action. Our fears drive our procrastination…more than we like to admit.

When this happens, we begin to feel more stress, overwhelm,  or self-doubt. We bring up deep-seated, unconscious fears about what might happen if we don’t get it done, or if we don’t do it right. Or, we might focus on what it means if we fail, the idea that we’re not good enough in some way. And the tricky part is we often have no idea we’re triggering these unconscious fears. On the surface, we’re just thinking “Ugh, I don’t feel like doing this today. I think I’ll go for a walk.” The idea that you’re just practicing, that it doesn’t matter, helps to sneak past a lot of these inner fears, and actually get moving in the direction you want to go.

And that ties us into the 2nd reason this trick works, which is because it helps you to build positive momentum. When you take an action, any action, towards your goal, you create chemical and electrical patterns in your brain. If you do not judge your action negatively – which, by the way the idea of practicing also helps you avoid – then these patterns form the beginning of positive habits and beliefs. Your brain starts to look for more ideas, more opportunities, and more resources that will help you, and this creates a positive feedback loop, which you experience simple as feeling good, or feeling like you’re making progress. And, if you continue to reinforce that state, you will start to think more clearly, get more done faster, and enter into a flow-state.

The key is to suspend judgment while you work, long enough for these positive, virtuous cycles to kick in. Thinking that you’re just practicing, just preparing to move forward, helps you to do just that.

Lastly, practice – deliberate practice – builds skill. And skill creates confidence. As you practice the action you’d been dreading, you will naturally get better at it. And we tend to like doing things we’re good at. So the mindset of practicing helps cultivate a longer-term perspective. We’re no longer trying to do the task just to get it done,  we’re doing it to build a skill, to learn something new, and maybe even develop a new interest you didn’t know you had.

So, the next time you catch yourself procrastinating on something, I encourage you to try this out. Like I said, I don’t think it works for every task we might be putting off, but it does work for a lot of them.

I know for me, it’s not even just about trying to get something done, because shifting my mindset in this way can completely change my energy and help me to feel more excited and more engaged, more in the zone with whatever it is I’m working on. When you take the pressure off, you might find It takes the durdgery out of the work as well, and makes it more fun. And, you never know, you might even find the task winds up being way easier than you thought it’d be. So give it a try. Practice your way out of procrastination. Just pretend. Just for a little while. And see what results.