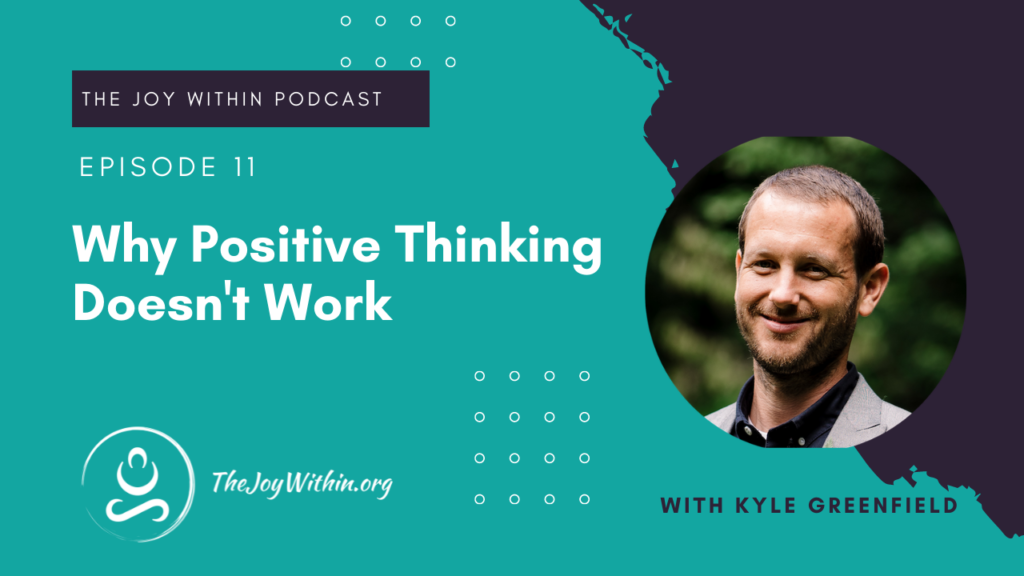 Hello and welcome back to The Joy Within’s podcast. Today I want to talk about positive thinking and why – most of the time – it just doesn’t work.

Now, I know that positive thinking is a huge pillar of the personal development world – but the reality is, I think the way it’s usually taught, the way most people try to work with it, is incredibly misleading.

At best it’s just not that helpful, but at worst it can actually set you back.

At least, I know for me, trying to “think positively” massively held me back for years, and, for a long time – I mean, almost a decade – I thought it was BS. And because I thought it was BS, I blocked myself from learning the tools and strategies that actually work.

Here’s what would happen. I’d be in a negative state and – because I was feeling down – pretty much anything that would happen I’d have a negative response to. I’d think something critical, or sarcastic, or judgmental or pessimistic. Then, I’d think “No, I need to think more positively.” So, I’d try to make something up that sounded better.

Except, nothing would happen. I’d still be in a bad mood and, sometimes, I’d even feel worse. Has that ever happened to you? Have you ever tried to come up with a thought or an affirmation that sounds better, but really deep down it just makes you feel worse?

It’s so frustrating. I’d always wind up feeling disheartened and even a little embarrassed, or ashamed even, because in the back of my mind I’m thinking “Geez, I can’t even think one stupid positive thought!”

And, when you’re in a negative state, there aren’t many “positive thoughts” that you can feel in that moment. They might sound nice, but you just don’t really believe them. You’re just paying lip service. You can’t really connect with them.

And, here’s the trick. This is the thing that really trips people up: What you believe changes from moment to moment. What you actually believe – what you can align with – changes depending on how you feel in that moment. And that means that the “right” thought to think, the “right” affirmation, changes as well.

And that’s what your resonance does. That’s why it’s so important. It is your silent, inner guide, your beacon, that is always on and always responding to exactly where you are, in good moods and bad, every second of every day.

Find that feeling of resonance first, and the right next thought will be there. And – often – that next, better thought might not even sound positive. It might just be something that is slightly less negative than where you were before, and that’s ok. That’s the path. Because if you can connect with that thought, even if it’s still negative, even if it doesn’t sound like your idea of what the perfect affirmation should be, then it will pull you into a higher state. Then you can pick another thoguht, and another and another.

But that feeling of resonance always comes first. Then the better-feeling thought. Not the other way around.