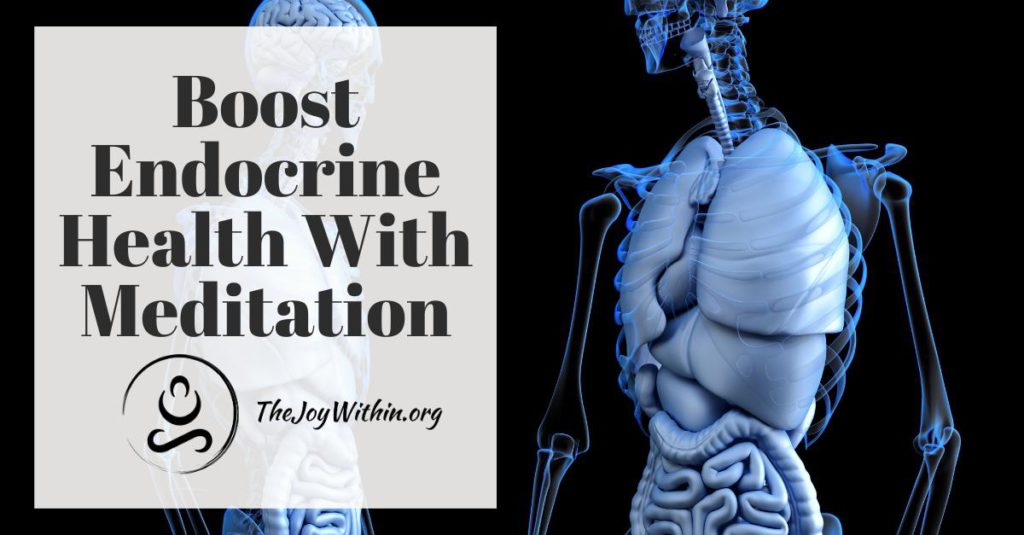 The body has a natural way of healing and rebalancing itself. When we practice meditation we become more focused, are brought into deeper joy, and also boost the endocrine system. Below we will guide you through exactly how meditation provides these amazing health benefits.

What Is The Endocrine System?

Comprised of many glands, the endocrine system works to regulate human functions such as metabolism, sexual function, growth and development, reproduction, tissue function, sleep, and mood through hormone production.

Glands function in the body to filter the blood and absorb specific materials to then process and release a chemical (hormone) to help the body somewhere else. This system may be commonly overlooked, but it actually affects every cell within the body.

Some of the main glands that make up the endocrine system are the adrenals, thyroid, parathyroids, hypothalamus, adrenals, pineal gland, the ovaries, and the testes.

Below we will explain how meditation effect some of these glands function which will then correlate to balancing hormone levels. This will directly impact mood, sleep, digestion, and even aging.

The two small glands located on the top of the kidneys, the adrenals, regulate the production and secretion of the hormone cortisol. This hormone is released when the body perceives stress and is one of the main hormones that flood our system when the fight or flight mode is activated.

Click here to learn more about just how meditation can rewire the flight or fight mode.

Meditation can also rewire our body’s sympathetic nervous system which is responsible for the flight or fight mode. By decreasing its ability to be incorrectly triggered our body optimizes digestion, lowers blood pressure, and can help one lose weight.

In 2013 a study was performed to measure the cortisol levels of 30 volunteers before and after a 4-hour mindfulness meditation program. Before beginning the course, volunteers had their blood drawn and completed a general health questionnaire that measured somatic symptoms, anxiety and insomnia, social dysfunction, and severe depression.

Another round of tests was completed after the 4-day mindfulness course taken at the same time of day as the first. The results showed a dramatic decrease in cortisol in the blood after post-meditation. This can then decrease stress as well as psychiatric disorders, peptic ulcers, and migraines.

The pituitary gland is also known as the master gland due to its large impactive reach throughout the body. It produces hormones that affect the adrenal glands, thyroid gland, ovaries, and testes.

One hormone the pituitary gland produces is called the thyroid-stimulating hormone which controls the activity of the thyroid hormone production.

A study followed two groups of volunteers to study the effects of Transcendental Meditation after 4 months of practice. The focus was on the hormones cortisol, growth hormone, thyroid-stimulating hormone, and testosterone.

This result didn’t show in the controls. However, in both groups, the baselines and/or stress responsiveness for thyroid-stimulating hormone, the growth hormone, and testosterone decreased in both groups.

This goes to show meditation over time can work to