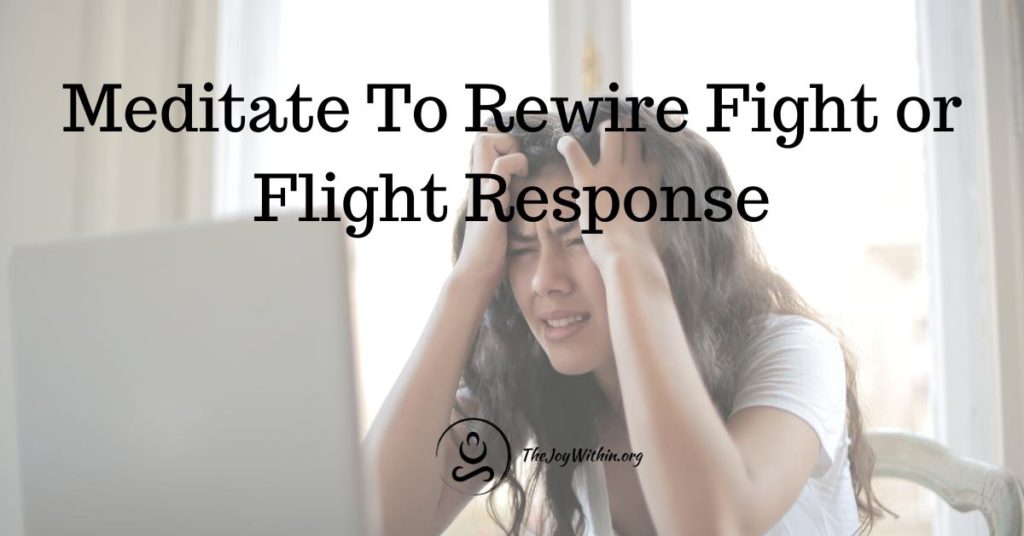 Sure, we know meditation has the power to rewire the way we think, but did you know it surprisingly has the ability to rewire the whole body? From the brain, all the way throughout the functioning of our autonomic nervous system, meditation can rewire the fight or flight mode.

Why is this so important to our health? Well, when the body perceives high levels of stress the sympathetic nervous system is chronically triggered and that can be damaging to our body. Find more meditation health benefits here.

What is Fight or Flight Mode?

Our bodies developed flight or fight mode when our primitive ancestors were roaming the earth. They faced different challenges than us. As I am sure you learned in biology, adaptation was the way that animals made sure to survive.

Flight or fight mode is the body’s response to perceived stress. When our ancestors perceived stress this was due to a wild animal encounter, battling the natural elements, or defending their territory.

First, our senses such as eyes or ears perceive a wild animal for example, and then sends the perception to the amygdala. The amygdala, an area in the brain, will then emotionally perceive the information and communicate the threat to the hypothalamus.

The hypothalamus directly interacts with the autonomic nervous system. The ANS has two systems. One is the sympathetic nervous system which energizes the body to react and survive stressful events. This one is what is activated during flight or fight mode.

The other is the sympathetic nervous system which is responsible for calming the body and maintaining its normal functions. This component is what allows the body to rest and digest.

After the hypothalamus receives the signal from the amygdala, it then generates an involuntary autonomic response so that we could fight or flight within an instant in order to get out of danger quickly. The sympathetic nervous system is then activated.

This causes hormones such as adrenaline and cortisol to flood our system and the body suppresses all nonessential functions such as digestion, the reproductive system, and the lacrimal gland which regulates salivation. Our blood vessels also begin to restrict themselves causing heart rate and blood pressure to increase.

Our sensitivity to pain is decreased and cortisol is released into the bloodstream it blocks the release of insulin in order to guide glucose to be available for immediate energy. The key component of this mode is that it is triggered as a temporary response for emergency survival purposes.

The reaction time of the amygdala and hypothalamus is so efficient that commonly our bodies are reacting to the stressor even before our imaging center in our brain has fully processed the threat.

Currently, we are no longer encountering as many wild animals or fighting rival tribes though many of us throughout society exhibit extremely high perceived levels of stress. Most of this stress is due to work deadlines, traffic jams, and psychological stress such as anxiety.

This, in turn, correlates to chronically triggering the flight or fight mode. In fact, it is triggered incorrectly because when we are stressed about a relationship we do not need our digestion to be paused and our body pumped full of adrenaline and cortisol.

Chronic flight or fight mode triggering can increase the risk for stroke or heart attack, cause weight gain due to cortisol production, muscle weakness, lower the immune system, and even irregular menstrual cycles.

You may enjoy our related article on how meditation can help ease PMS.

Meditation and Fight or Flight Mode

A study led by a team at Massachusetts General Hospital and published in Psychiatry Research: Neuroimaging focused on the results of meditation and the brain’s grey matter.

The study measured 16 brains of people who have never meditated before. They were measured with MR images 2 weeks before beginning the eight-week mindfulness meditation program and as well as afterward. The participants meditated daily for an average of 27 minutes.

The results showed the brain actually begins to change the brain’s structure as an increase in grey-matter was found within the hippocampus. Which is related to learning and memory function. See more ways the brain structure is changed by meditation here.

Now in correlation to flight or fight mode the results in this study showed a reduction within the grey matter of the amygdala. Which as explained above the amygdala plays a big role in perceiving anxiety and stress and triggering the fight or flight mode.

To begin meditating and enabling your body to reap the many and numerous health benefits of meditation you can try our 30-day meditation program to assist you in beginning your meditation journey!