Meditate For Whole Brain Synchronization Become One With Your Mind 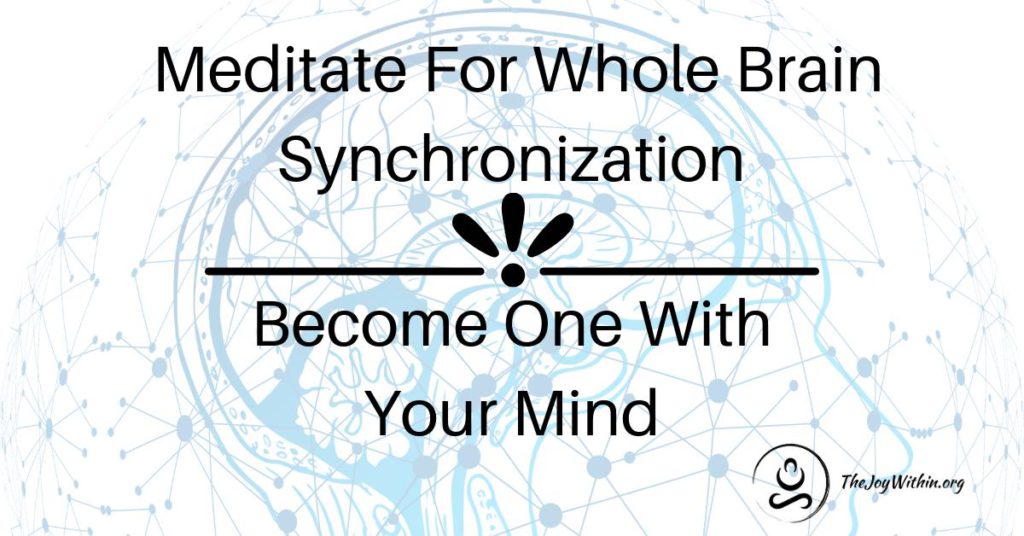 You may have heard that it is actually a myth that we only use 10 % of our brains. But did you know we also are not limited to being only left or right side dominant within our brains?

Actually both sides of the brain can function together in whole-brain synchronization. Although this is possible it doesn’t necessarily mean we are doing it, but meditation might be the key to doing so. Get started with our 30-day meditation course for beginners.

Why Whole Brain Synchronization Is Important

Have you ever heard if you don’t use it you lose it? This sort of speaks about what happens in the brain and why whole brain synchronization is important.

Our behavioral patterns and thought patterns follow the same neural pathways and use the same parts of the brain which can then cause the non-active parts to atrophy. This not only reinforces behavior but it also causes the perspective of the mind to become narrowed to a habitual way of thinking.

Hence, making it actually harder to teach an old dog new tricks and keeping us locked into old habits. Learn how meditation can help you build a bigger brain here.

This keeps us further away from success because “If you want something you‘ve never had. You must be willing to do something you’ve never done“.

Thomas Jefferson said that quote and it covers the point that using whole-brain synchronization is key to finding success, keeping an open mind, and destroying negative patterns.

You have probably heard of the left and right sides of the brain before. You may be aware that people commonly tend to have had a stronger side or a side they use more whether they are more creative (left hemisphere) or logical (right hemisphere), but there is more to it than just that.

Affecting both the physical and emotional bodies meditation can also treat anxiety.

Both sides of the brain can work independently as well as they can work together which is where the superior functioning whole brain synchronization happens. When we are in brain dominance we can have tunnel vision and see logically while lacking emotion or emotionally while lacking logic.

When we can get both hemispheres of the brain to synchronize then we are able to utilize our full capabilities. Meditation can create this hemispheric synchronization. You may be beginning to wonder what the easiest meditation practice must be, find out here.

Exactly How Meditation Can Cause Whole Brain Synchronization

The corpus callosum is a cross-linking bundle of nerves that works basically as a bridge connecting both hemispheres of the brain. You can imagine having a strong bridge can be important for creating a connection between two hemispheres.

A study was performed in 2012 at UCLA School of Medicine looking at the brains of 20 meditators and compared them to a control group of 30 non-meditators. Measurements were taken with diffusion tensor imaging and MRI.

The results showed the meditator’s corpus callosum was slightly larger and thicker. This could possibly be due to the fact that in meditation one works to release habitual mental patterns and often strengthens the mental processes that are weaker an unfamiliar through the mind expansion effects.

Learn what to expect from starting your meditation practice here.