Jim Carrey A Living Example of The Law of Attraction 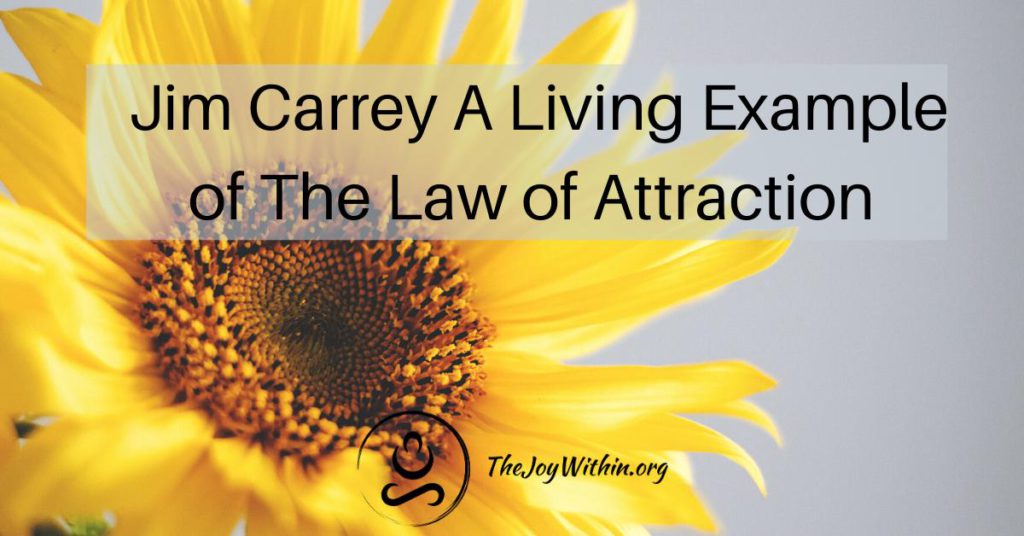 Jim Carrey, the artist, producer, and actor is most famous for his lively roles in many movies such as The Mask, The Truman Show, and Bruce Almighty. What you may not know about him is he is a huge teacher and living example of the law of attraction.

Jim Carrey and The Law of Attraction

Starting from the bottom and working his way up Jim Carrey used visualizations and many other tools to make himself feel better and manifest his dreams. He doesn’t credit all of his success to the law of attraction because he does believe that you need to work towards your dreams and not just rely on faith.

Jim Carry in his interview with Oprah talked about how he used to go up to Mulholland drive every night and visualize himself being a successful actor. This included impacting people positively, working roles he desired, and being financially successful.

Learn how to create a mood board to help you visualize your desires.

He also stated in a different interview that sometimes he even visualized a giant funnel bringing him gifts from the universe. The goal he had in mind here was to just make himself feel better.

He followed what felt best to him in these visualizations and let is bring him into the emotional state he desired. He also adopted a mindset that supported him in being successful. Click here to learn about how to get visualization to work for you.

In the interview attached below, Jim Carrey speaks about a $10 million check he wrote himself. He gave himself five years to fill it and when he wrote it he was not currently making this amount of money and was struggling as an actor.

Right before thanksgiving in 1995 when he dated the check, he found out he was going to be signing a contract for Dumb and Dumber that would cause him to make $10 million dollars. You can watch him talk about this in the interview below.

Learn more about using the law of attraction to manifest success.

In this interview with Oprah, Jim Carrey talks about how he used the law of attraction, belief in himself, and making himself think positively to manifest his dream work. His story brought him from a struggling actor to a movie star.

The Best of Jim Carrey’s Quotes

Jim Carry, as a living example of ask for what you want and you shall receive it also has some very inspiring and powerful quotes. We have compiled a list of those below. Prepare to be inspired.

As far as I can tell, it’s just about letting the universe know what you want and then working toward it while letting go of how it comes to pass.

I learned many great lessons from my father, not the least of which, was that you can fail at what you don’t want so you might as well take a chance on doing what you love

As far as I can tell, it’s just about letting the universe know what you want and then working towards it while letting go of how it comes to pass.

Life opens up opportunities to you, and you either take them or you stay afraid of taking them

If you would like to continue learning more about how to manifest your desires with the law of attraction, learn how meditation can help.