How To Know If Kundalini Is Awakened? The Symptoms and Process 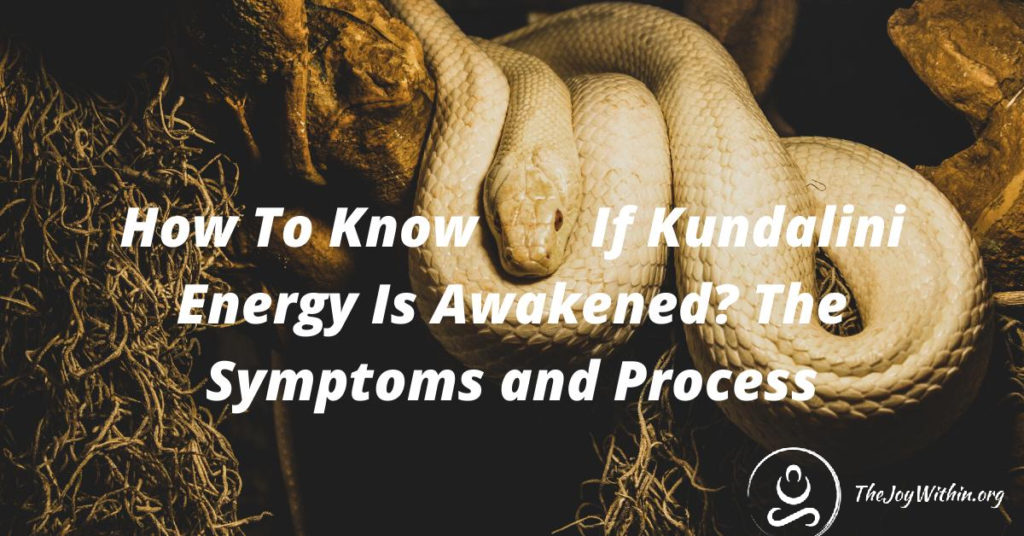 Kundalini energy, commonly spoken about in meditation, yoga, and spiritual teachings. It is a deep, intense, and abrupt transformation that comes from awakening a powerful dormant energy within you. It creates a lasting impact of heightened senses, higher consciousness, and death of the ego.

What Is Kundalini Energy?

Stemming from the roots of ancient India, the Kundalini energy spreads throughout a wide range of esoteric traditions such as Taoism, Gnostic mystical tradition, Tantra, and Kabbalah. It is taught within the Upanishads, a Vedic collection of writings that influenced both Hinduism and Buddhism.

Kundalini energy is said to be coiled around the base of the spine, or the Muladhara chakra, 3 and 1/2 times. It is within us since the time of birth and typically lies dormant within our energy field unless awakened.

Kundalini energy is divine feminine or Shakti energy. It is our creative power and It has the power to stimulate, heighten, and awaken our senses and our being to higher levels of consciousness.

As the feminine Shakti Kundalini energy merges with the divine masculine, Shiva energy through kundalini awakening, it is believed to represent the unity of duality and to bring us beyond the illusion of such.

Along the way up the spine and through the chakra system, Kundalini energy raises the vibration of your entire energy field as well as. You may be wondering what exactly it would feel like to have a Kundalini serpent awaken and transform your entire being. Well, keep reading to find out!

Being symbolized by a snake is no coincidence with the Kundalini Energy. Snake venom can be deadly as well as a life-saving medicine. This speaks about the process of awakening kundalini which can be both blissful or uncomfortable.

Although as you have experienced in life (we all have) intense transformation and potent divine blessings can come specifically from difficult and even seemingly negative experiences.

We mention this because as Kundalini energy is awakened there is of course a deep transformation happening which includes shifting the mental, physical, and spiritual bodies. It is typically categorized as a quantum jump rather than a gradual unraveling.

Some of the symptoms include vibrating or shaking, surges of energy throughout the body, psychic visions, and a quite expansive shift in the mental perspective.

This can include feeling disassociated due to the shift within your personal identity, dissolvement of the ego, and destruction of attachment.

There is nothing wrong with either process, although it is important to understand that you can surrender to the process and find a seat of relaxation while you allow the transformation to pass through you.

Grounding exercises can help bring ease to a Kundalini awakening as well as being gentle, compassionate, and listening to your inner voice on what your needs are. This can include taking time to be alone in nature or even practice grounding yoga.