Battling Postpartum Depression? Get Meditation On Your Team 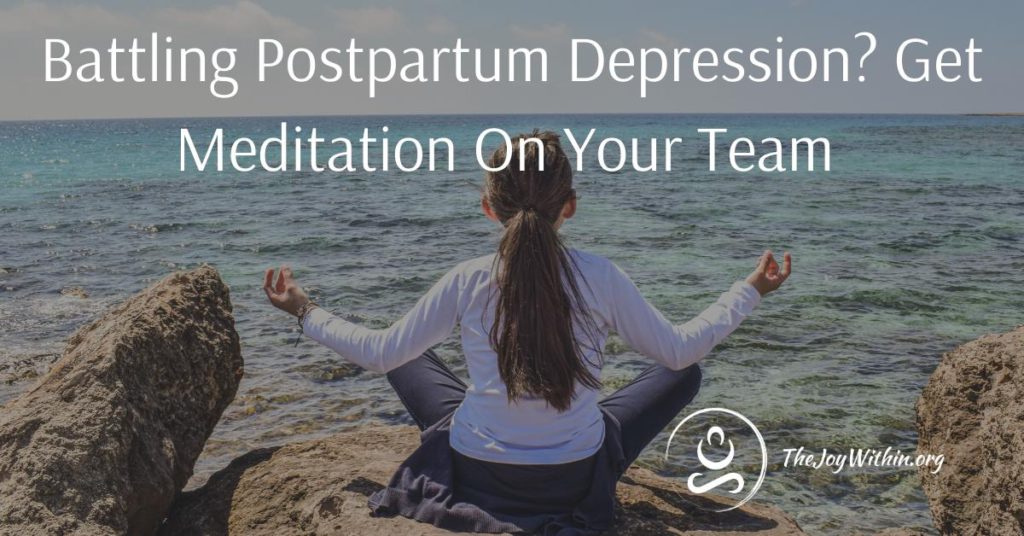 This was shown in the largest studies of postpartum women ever performed though it does not include women who have had stillbirths or miscarriages. Of course, it is even believed that the actual rate of postpartum depression may be much higher.

If you are already ready to initiate a change and transformation within yourself, you can begin with our 30-day beginner’s meditation course that will guide you step by step to creating your meditation practice.

Otherwise, keep reading and we will talk more about postpartum depression and why meditation is one of the best answers.

How Meditation Can Treat Postpartum Depression

It’s okay if you are wondering just how beneficial meditation is for postpartum depression (PPD) because, of course, you are looking for the most effective treatment. Well, meditation is backed by many scientific studies as a treatment for PPD.

Such as this study published in 2017 that followed 64 women with PPD split into two groups. One was a control group that was given an eight-week mindfulness training course while the other was asked to continue their normal routine.

The groups were evaluated through a self-reported inventory of their mental health and states of depression. The results showed a very significant decrease in depressive symptoms within the meditation group.

The study even dubbed meditation as a treatment that can be used instead of psychiatric care. Of course, it can also be used in combination with any other treatment out there as it has no negative side effects and actually brings with it a multitude of health benefits.

How Meditation Works As A Holistic Remedy For Post Partum Depression

Pregnancy and childbirth alter the body drastically from completely moving internal organs to even separating the pelvic bone during vaginal birth it is no wonder that bringing new life into this world may lead mothers to need additional emotional guidance.

Mothers who have had depression prior to pregnancy, during pregnancy, or with a previous pregnancy are at an increased risk of developing postpartum depression.

This could be due to underlying issues that childbirth causes to surface such as a lack of strong coping skills, hormone imbalances, and mental perspectives that don’t serve the mother.

As a preventative measure and a treatment, we can look to meditation to treat postpartum depression holistically. In this next section, we will cover some of the ways in which meditation can help you.

Why It’s Important To Distance Yourself From Your Thoughts

Through the act of meditating, we begin to create space from our thoughts. We learn to attach less to them and remove our identity from them.

Byron Katie, author of Loving What Is, teaches how when we form thought inquiry we can begin to separate ourselves from identifying with them, which frees us from suffering. This may sound like a big task for something as small as thought inquiry, but let us explain why.

First, thought inquiry is questioning the validity of the thought you are thinking rather than directly believing it. Byron Katie learned this from her own experience battling severe depression, drug addiction, food addiction, high levels of aggression, and deep feelings of unworthiness.

She had an awakening pivotal moment where she watched negative thoughts pour into her mind and she only suffered, she only changed her state of peace when she believed it.

This is one of the beauties of meditation, they teach you how to take a step back from your thoughts and how to watch emotions or even physical sensations from a neutral and nonjudgmental space.

This means you can begin to remove suffering at the root and in the simplest way. This skill can completely and single-handedly disarm feeling unworthy because you simply do not believe or give any credibility to a thought that you are unworthy.

This extends to even a thought that would make you suffer. Meditation can help you label strong emotions, just that intense and strong emotion. You are the observer, not the emotion because you have watched the emotion come and go which means you can not be the emotion as you were here before it and will be here after it.

How Meditation Can Balance Your Hormones

Pregnancy as a physical experience is intense and about as intense as it can become as this is where we all have come from after all. Which in women who have postpartum depression recalibrating your hormone balance

Linked directly to depression is a low serotonin level. You may be wondering all that serotonin does? Well, serotonin is a powerful chemical and neurotransmitter, which helps the brain to relay messages from one region to another.

It regulates emotions, sexual function and desires, memory and learning, appetite, and sleep. Many studies have been performed to show that meditation can actually increase serotonin levels. Research also shows that regular meditators naturally have higher levels of serotonin than non-meditators.

In 2003 a medical hypothesis by Newberg AB, Iversen J., in the neural basis of the complex mental task of meditation: neurotransmitter and neurochemical considerations, showed that after the participants’ meditation sessions there was a rise in the breakdown products of serotonin. This means that more serotonin was produced and used within the body after meditation

With the emotional and physical roller coaster of pregnancy, childbirth, and raising a child a holistic treatment that effects is required in order for you to find your balance in not just one area of your life, but throughout your entire life.

This is where meditation which rewires the brain physically and emotionally is the saving grace that if you commit fully to it will produce results. It may sound crazy to think that meditation can actually change your brain physically while you may have only considered the emotional rewiring effects of meditation.

Published by a team at Massachusetts General Hospital and published in Psychiatry Research: Neuroimaging, 6 brains of people who have never meditated before were measured with MR images 2 weeks before beginning an eight-week mindfulness meditation program and as well as afterward.

The participants meditated daily for an average of only 27 minutes. They practiced mindfulness meditation which is a technique to formulate objectivity by cultivating awareness of your surroundings, your thoughts, feelings, and sensations.

It creates deep focus while also teaching one to see through illusions of emotional bias. Learn more about mindfulness here with this guided meditation.

The amygdala is commonly associated with the role it plays in correlation to emotional processing including anxiety, stress, and triggering the “fight flight or freeze” response.

Meditation As A Coping Skills

For those moments when you are finding yourself more stressed or overwhelmed try implementing one of our 5 favorite breathing exercises known by yogis and meditation teachers as pranayama.

If you are ready to initiate more support and want to sign up for our 30-day beginner’s meditation course, we are ready to teach you the tools to win this battle with postpartum depression.