15 Quotes To Keep You Striving For Greatness 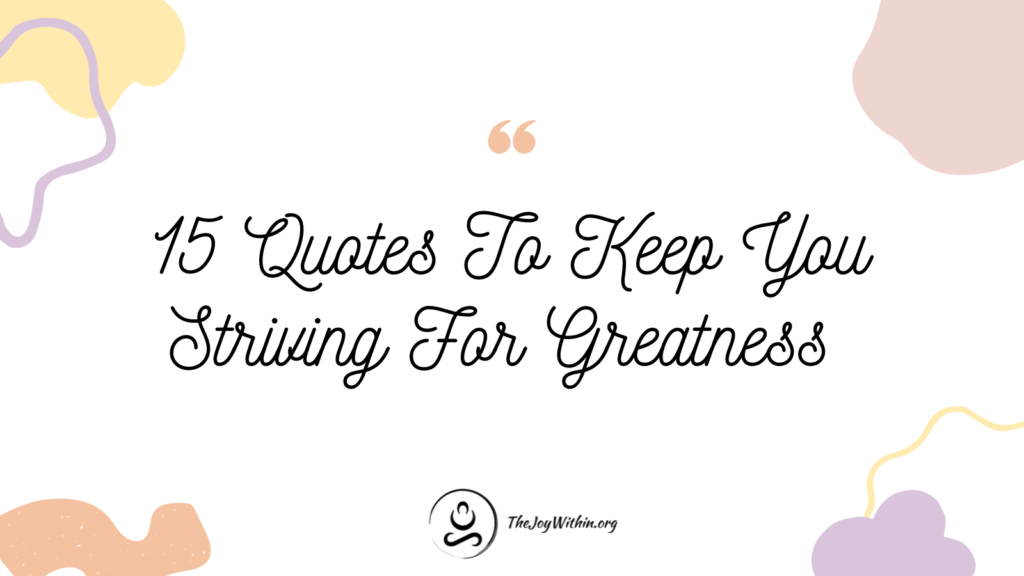 We all want to be great.

However, motivating ourselves to keep striving when the world feels like it’s against us isn’t always easy.

And while there are a ton of ways to get ourselves motivated or inspire us for greatness, they often come in the form of long and complicated lessons or workshops.

Now, that’s not to say that these approaches don’t work. If you are willing and able to put in the time and work, they will.

However, if you’re looking for some immediate motivation for this moment, quotes are a great way to get you inspired.

This is because they allow you to view the world from the perspective of someone who may have a more motivated or positive outlook.

The key here is to remember that simply reading the quotes will not do much. You must feel them and embody them every day in order for them to have an effect on your life.

“Don’t worry when you are not recognized, but strive to be worthy of recognition.” – Abraham Lincoln

Some won’t appreciate you no matter how much you do for them. Release yourself. Go where you’re appreciated and understood. – Robert Tew

“Never stop doing your best just because someone doesn’t give you credit.” – Anonymous

“There is no failure except in no longer trying.” – Elbert Hubbard

“There is only one thing that makes a dream impossible to achieve: the fear of failure.” – Paulo Coelho

“Do the one thing you think you cannot do. Fail at it. Try again. Do better the second time. The only people who never tumble are those who never mount the high wire.” – Oprah Winfrey

“Failure should be our teacher, not our undertaker. Failure is delay, not defeat. It is a temporary detour, not a dead-end. Failure is something we can avoid only by saying nothing, doing nothing, and being nothing.” – Denis Waitley

“Keep away from people who try to belittle your ambitions. Small people always do that, but the really great make you feel that you, too, can become great.” – Mark Twain

“Take a stand for what’s right. Raise a ruckus and make a change. You may not always be popular, but you’ll be part of something larger and bigger and greater than yourself. Besides, making history is extremely cool.” –  Samuel L. Jackson

“The difference between a successful person and others is not a lack of strength, not a lack of knowledge, but rather a lack in will.” – Vince Lombardi

“There is no greatness without passion to be great, whether it’s the aspiration of an athlete or an artist, a scientist, a parent, or a businessperson.” – Tony Robbins

There you have it. 15 quotes to help motivate you to keep striving for greatness and never quit.

The more you read these words, the more you will start to believe them and subsequently embody them.

So take a moment each day to review at least one. You may wish to write it down in your journal, or read it aloud to yourself.

The important part is that you are consistent and have an open mind.