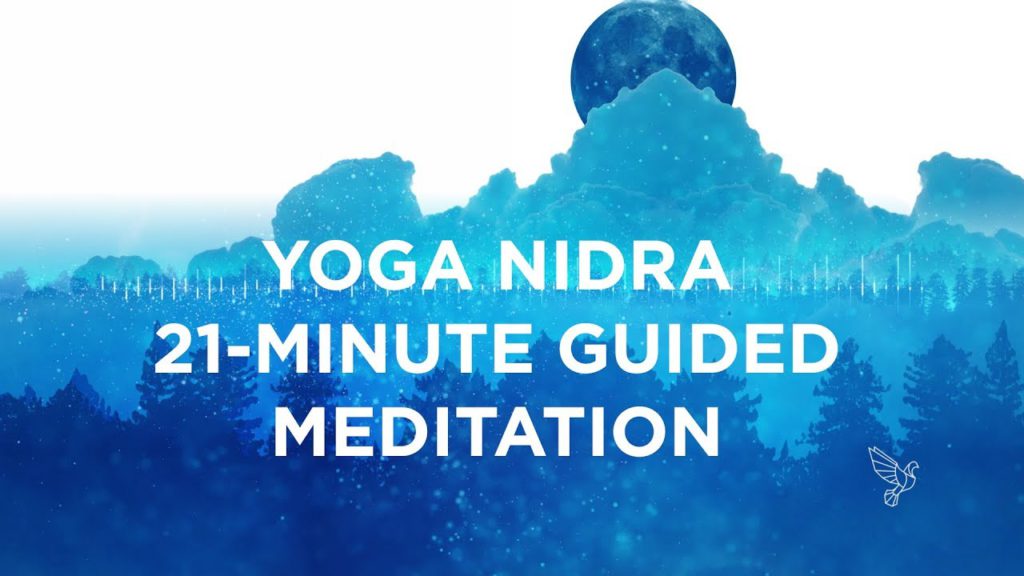 Yoga Nidra, or sleeping yoga, is a state of consciousness that can be attained through deep meditation. It is a common meditation used for stress relief and relaxation, and can be a great way to revitalize your energy by bringing your body and mind into a very relaxed state bordering on the edge of sleep.

In this post we’ll look at the basics of yoga nidra and provide a guided audio meditation you can use for a good night’s sleep.

What Is Yoga Nidra?

Yoga Nidra is a meditative practice that involves lying down and listening to a guided recording or teacher instruct your mind to relax.

Usually, the practitioner lies in a comfortable position, often supported by pillows and covered with a blanket to provide a slight amount of weight. With eyes closed, he then draws his awareness inwards, allowing all of his senses to drop away.

Unlike meditation, which approaches a relaxed state of consciousness through intense focus, yoga nidra aims to release your focus, and allow the mind to wander. The prompts given by the instructor are the only attention given, and even this focus becomes loose, and almost hypnotic, during the practice.

Learn more about How To Do Yoga Nidra at Home.

The Science of Yoga Nidra – Why It Works

If you’ve ever tried this form of meditation, you’ve probably found it was an incredibnly effective way to release stress and ease physical tension in the body. Additionally, you may have found that yoga nidra causes you to feel extreme states of bliss and a general feeling of well-being.

The reason is that yoga nidra has been shown to release an icnrease amount of dopamine into the brain, which is a well-known trigger for feelings of peace and happiness. Yoga Nidra has also been proven to reduce the rate of blood flow through the brain. This reduced blood flow is what causes you to approach a near-sleeping state while being able to maintain lucidity. Over time, the practice of yoga nidra can relieve a number of ailments, including headaches, hypertension, abdominal pain, and trauma, among others.