With Meditation Deep Relaxation Is Mentally and Physically Attainable 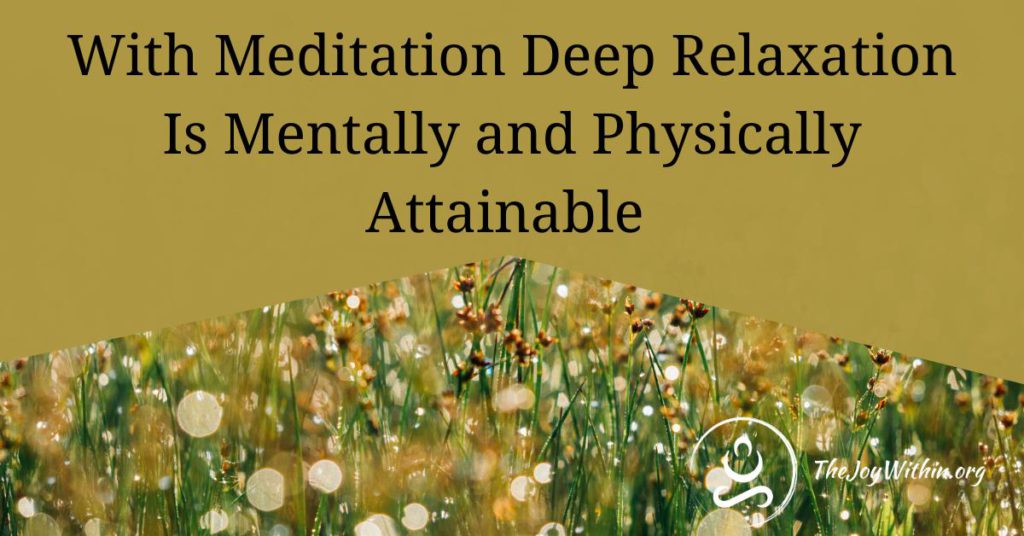 Deep relaxation is where the body repairs itself and where the mind can heal traumas it has been through. Although the health benefits of it are known, it can still be hard for people to get there. This is where meditation can help.

Meditation and The Mind

Meditation begins to create new neuropathways that are help the brain require how it thinks and can make it less prone to becoming more stressed while also calming down in the moment of meditation as well. This is how meditation can empower one to break addictions.

When we practice remaining in a zero state of mind where we look at life, our thoughts, and even sensations we experience as neutral we begin to become less owned by stressful thoughts. This is one of the biggest techniques for meditation and brings us to be free from immediately identifying with and following the mind.

Meditation takes time to grow this skill, but surprisingly it comes faster than you may have thought as you will see below on how quickly it impacts the body’s physiology. You can feel how meditation has the ability to calm the mind an bring it to stillness by following along to this guided meditation.

How Does Meditation Help Your Body Relax Physically?

At some point in your life, you have no doubt noticed that stress can affect your body and actually quite significantly. Especially if you are in a situation that you have allowed to create chronic stress within you.

Well, meditation can help you reduce the harmful effects of stress and even help the body rewire its perception of stress! First off, meditation releases many different calm neurotransmitters.

We will cover two main ones such as, Gamma-Aminobutyric Acid (GABA), an inhibitory neurotransmitter that is most well known for its calming effect and mood regulation. GABA works to soothe and help neurons recover after firing. This, in turn, can decrease the effects of anxiety and stress.

The results showed a significant increase in GABA compared to those of the nonmeditators. This may make those of you who think meditation is simply a placebo effect take another look.

Secondly, most famous for its feel-good effects and is linked directly to depression, serotonin actually regulates a lot of functions within the body rather than simply mood. Serotonin regulates emotions, sexual function and desires, memory and learning, appetite, and sleep.

Continue Learning About The Health Benefits of Meditation

From calming the nervous system to creating whole brain synchronization the health benefits of meditation are numerous and profound. Learn more about them here!