Meditate To Relax Your Nervous System and Empty Your Mind 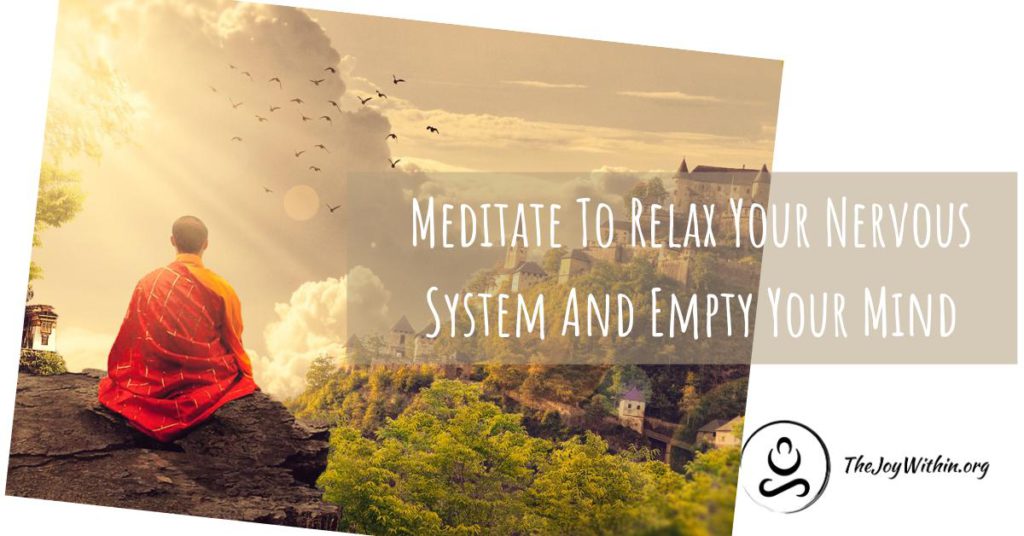 When the body perceives stress many things happen at once. If we are chronically stressed our body’s nervous system becomes overactive and detrimental to our health.

This is why it is important to mediate soothing the nervous system which we can do through meditation. Learn more about how meditation reduces stress here.

To start where it all begins, meditation can rewire our perception of stress so that the nervous system can stay relaxed rather than be triggered by an everyday life stressor. This is done within the amygdala.

It plays a strong role within the fight or flight system by emotionally perceiving information and then communicating it as a threat to the rest of the body and triggering the autonomic nervous system, ANS, to activate the sympathetic nervous system.

This is part of fight or flight mode which when it is triggered hormones such as adrenaline and cortisol flood our system and the body suppresses all nonessential functions such as digestion, the reproductive system, and the lacrimal gland which regulates salivation.

Our blood vessels even begin to restrict themselves causing heart rate and blood pressure to increase. This side of the ANS is the opposite of the parasympathetic nervous system that is necessary used when our bodies to shift out of danger or a stressful event and can then rest, digest, and repair.

A study was performed following the brain’s gray matter within the amygdala following an 8-week mindfulness-based stress reduction MBSR course effect on healthy but stressed individuals. The results showed a direct decrease in the gray matter of the amygdala that directly correlated to a decrease in stress as well.

It is well known many meditators express they feel much calmer after meditating. This may be due to the fact meditation can calm the nervous system in another way, such as by releasing calm neurotransmitters.

One of these neurotransmitters releases includes Gamma-Aminobutyric Acid also known as GABA. It is an inhibitory neurotransmitter that can block or impede neural signals.

It calms the nervous system and works to soothe neurons and help them to recover after firing. This, in turn, can decrease the effects of anxiety and stress.

Since the nervous system is largely intertwined with the functioning of the body as a whole there are many ways to impact the nervous system to help it relax. Meditation itself is able to provide an incredible array of health benefits throughout the entire body.

These include relaxation responses in the body that trigger the nervous system to relax such as our breath. Meditation can slow the respiration rate and increase lung capacity as well which activates the parasympathetic nervous system through diaphragmatic breathing.

Begin your meditation journey with our 30-day meditation course which will guide beginners to start their meditation practice and find the necessary tools and assistance to do so.