Emotional Blockages of The Root Chakra 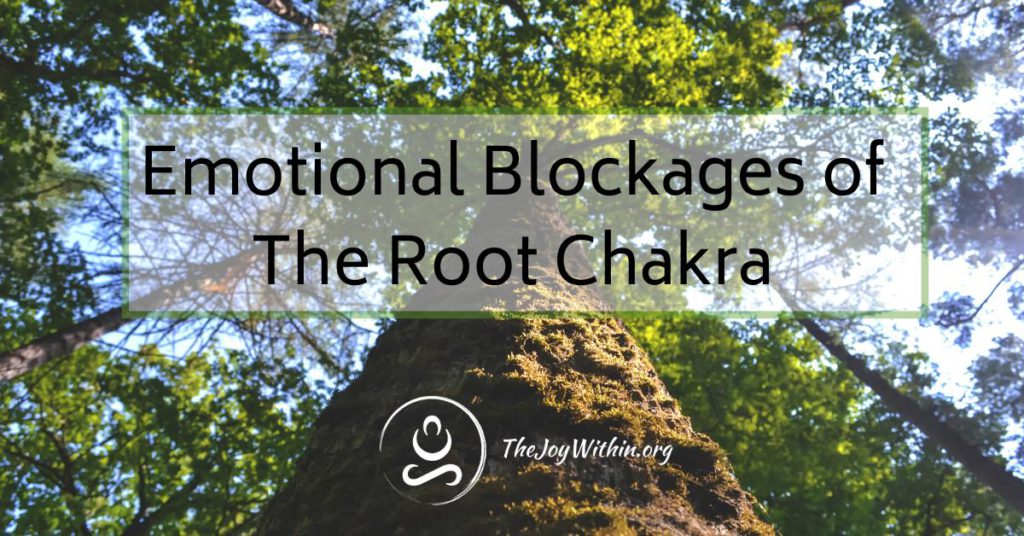 The first chakra, Muladhara, is known commonly as the root chakra. Each chakra rules an aspect to our emotional, mental, physical, and spiritual bodies. The chakras work together to create your entire being. They are interconnected meaning that when you are emotionally blocked this correlates to the health and vibrancy of the rest of your being.

When the root chakra is open it shows as feeling safe and secure. This chakra is related to our foundation, our physical needs, the element of earth, and our primal roots.

When the root chakra is strong and healthy one is able to relax into the present moment and feel confident within their surroundings. This manifests as a healthy home life, financial security, and a healthy relationship with possessions.

Feeling confident to take risks because you know that you are supported is another layer to the root chakra. Feeling emotionally safe as well as confident in your abilities are involved within the root chakra.

Being grounded is another sign of an open root chakra. This means having a realistic approach to life. A healthy balance between optimism and realism as well as risk and safety.

Being able to remain calm when feelings of anger and panic arise come from a healthy root chakra as well. Extending support to others and having great patience are also involved.

There is a subtle difference between a blockage and an overactivation of the energy within the chakras. Simplified a blockage will be an aversion to allowing prana to circulate through this chakra whether that be from stagnation or a wall built out of fear. Click here to learn more about what causes chakras to be blocked.

When the first chakra is blocked telltale emotions that may flood the system include fear and anxiety. This can take the form of a strong scarcity mindset and possibly hoarding tendencies.

Struggling to share, selfishness, and having a victim mindstate stem from an underactive root chakra. Not feeling safe to open up to or connect with others can be another symptom as well.

Other emotions that may circulate are pessimism, avoiding conflict, and inability to feel energized or motivated. Excess stress and poor time management are involved as well.

Emotional Symptoms Of A Root Chakra Over Activation

Now to get into over-activation. An overactive chakra is like a gathering of energy within one energy center that causes the entire chakra system to be imbalanced. It can display itself as an intense emotional attraction or aversion to certain root chakra characteristics.

Emotional symptoms of an overactive root chakra include aggression and greediness. This is due to an attachment to material possessions. Addictive behaviors also can come from a root chakra over-activation.

When the ego, impulsivity, and controlling behavior present themselves it is time to look at the root chakra. The inability to find fluidity, forgiveness, and resisting change can be other symptoms. Learn more about root chakra problems and imbalances here.

How To Balance The Root Chakra

There are many ways to bring healing to our first chakra. Direct action can be applied by self-reflection. Such as during investigative and completely honest journaling one can then see any emotional blockages we have around the solar plexus chakra’s territory. Click here for journal prompts for the root chakra.

Other techniques to heal the root chakra include journaling or speaking root chakra affirmations. The affirmations work to reprogram your subconscious through repetitive positive statements. These will then in turn not only shift your inner dialogue but also your emotional body.

Taking time to ground yourself and connect with the earth will directly open and balance the root chakra. Grounding techniques involve spending time in the earth barefoot or visualizing ourselves as a tree and sending roots down into the earth from the base of our spine.

Meditation is another way to cleanse and bring the root chakra into its unique optimal alignment. This is due to the way meditation reduces stress, accumulates mental concentration, and dissolved distractions of the mind. Click here to find one of our beginner meditations or choose a mantra here to practice on your own.

In order to balance the root chakra fully it is important to look at your chakra system as a whole. For this, you may also enjoy this guided meditation for healing all of the seven chakras.