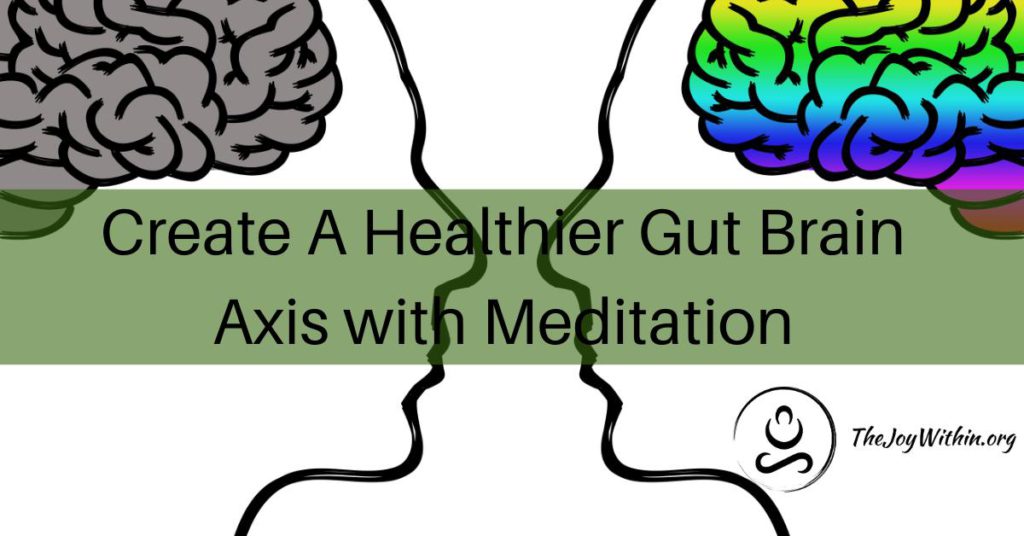 We all know the brain has a huge impact on the body’s function. Meditation gives us the ability to heal the brain. Did you know that through the simple act of meditation you can create a healthy gut-brain axis?

What Is The Gut-Brain Axis?

To give you more reasons as to why you should meditate for not only your emotional wellbeing but your physical health, we will explain how mediation affects the gut-brain axis. The Enteric Nervous System, ENS, is also known as the “second brain”.

Now, why is this mesh system of neurons, the ENS, covering our gastrointestinal tract called the second brain? This is due to its ability to function independently of the Central Nervous System.

To clarify the gastrointestinal tract is the entire system in the body that takes in, digests and absorbs nutrients from, and then eliminates the food. The central nervous system, or CNS, is made up of two parts, the brain and the spinal cord.

Through the gut-brain axis the CNS and the ENS communicate bidirectionally like a two-way street. This then creates a bidirectional connection between our gut health and to our cognitive and emotional centers of the brain.

These bacteria directly interact with the enteric nervous system which in turn can trigger chemicals that affect all parts of the body as well as impact all the way up to the brain. You can watch this video to learn more about just how the gut-brain axis works.

Meditation and The Gut-Brain Axis

A study performed at Massachusetts General Hospital followed 48 participants for 9 weeks with Irritable Bowel Symptoms (IBS) or Inflammatory Bowel Disease (IBD) and looked at the effects of meditation on these diseases. Every week participants took a short class to learn about the relaxation response.

This is the state the body enters when in deep relaxation such as during meditation or yoga and was found by Herbert Benson. Each day participants were asked to practice for 15 to 20 minutes.

Participants were examined prior to treatment, during, post-treatment, as well as 3 weeks post-treatment. The results showed that meditation changed 200 gene expressions within IBS and over 1,000 genes in IBD! Many of these expressed genes were related to causing inflammation and stress responses.

In the gut-brain axis one of the ways the ENS communicates to the CNS is through the vagus nerve within the parasympathetic nervous system. Studies show that meditation can increase the baseline vagal tone and reduce depression, anxiety, and chronic pain within patients.

Any form of meditation will shift you into your body’s sympathetic nervous system and allow it to relax, thus helping increase the health of the gut-brain axis. Studies have shown loving-kindness or Metta meditation was shown to decrease depression and anxiety as well as mindfulness meditation.