How Do You Reach Moksha? The 3 Yogic Paths 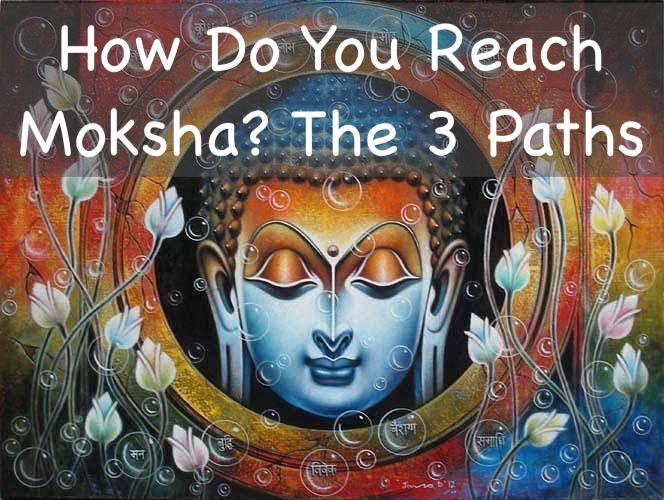 In Hindu philosophy, Moksha is an enlightened state of being in which you have completed the cycle of reincarnation and transcended the need for future physical lifetimes. It is a state of complete emotional freedom and non-attachment, with an awareness of your true-bliss nature, in connection with all things.

Reaching moksha is the end of your soul’s spiritual journey on the physical plane, and is considered the highest and most desirable goal: last of the four Purusharthas.

While there are many different practices you can use to achieve moksha, traditionally there are three yoga paths to self-liberation.

Related Post: How To Be Free. The Path of Self-Liberation.

How To Reach Moksha: The Three Paths of Yoga

In some teachings, a fourth path – Raja Yoga – is added, which is the path of mental discipline and meditation.

Karma Yoga: The Path of Action

Karma refers to the system of corresponding energy, which determines how the events of one’s life unfolds. In Hindu philosophy, every action creates karma, and this karma can be good or bad.

In the West, you might think of Karma as the idea that “what goes around comes around,” though with the twist that what you experience in this lifetime may be the result of karma from past lives.

The practice of Karma Yoga is not simply to focus on good deeds, however. It is to create an intentional life, in which you perform actions selflessly, without consideration of personal gain. This practice applies to every action you take, and goes hand in hand with the Buddhist teachings of practicing loving-kindness.

Bhakti Yoga: The Path of Devotion to God

Bhakti Yoga is a practice of constant devotion. Many consider this to be the easiest of the three paths; it requires one to apply unconditional love to every aspect of his life.

However, to truly follow this path requires constant discipline and devotion, as Bhakti yoga, in its purest form, asks the practitioner to surrender everything in life to God’s love, and to treat everything with complete acceptance and non-judgment. From this state, one opens oneself to a higher, divine love.

Traditionally, there are 9 principles (or limbs) of Bhakti Yoga, which are supposed to guide and assist you on the path.

Jnana Yoga: The Path of Knowledge and Wisdom

Their are four pillars, or steps, involved in the pursuit of Jnana Yoga.

Raja Yoga : The Path of Meditation

While traditionally there are only three yoga paths to achieve moksha, in some texts a fourth path – raja yoga – is added.

Raja yoga is a specific type of meditation in which the practitioner uses a series of psychological experiments in order to deepen his spiritual connection. These experiments include different exercises (including pranayama techniques and common mantras) for concentration and focus, with the idea being that through disciplined mental practice, one can come to know the truth of his own existence.

What Happens To The Soul After You Attain Moksha?

You can reach moksha by following any of the yoga paths identified above, but what happens to the soul after moksha is achieved?

Once you get to a state of moksha, you are an enlightened being. This means that you have a strong sense of unity with the divine energy. You achieve self-realization, as you understand yourself as One with All That Is, and you no longer have a need to focus on the physical self. As such, you release the ego’s attachment to the body, and enter a state of communion with your divine nature.