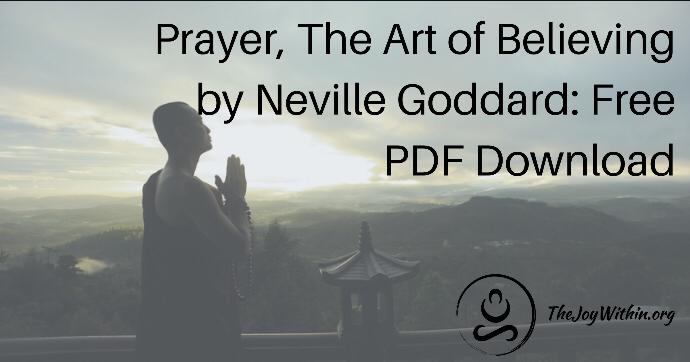 Now a world-renowned law of attraction teacher from the mid-1900s, Neville Goddard, has allowed all of his books to be available to the public domain. He was the teacher of Wayne Dyer, a best selling NYT law of attraction author.

The Premise of Prayer The Art of Believing

Neville wrote, “This book is an attempt to reduce the unknown to the known, by pointing out conditions on which prayers are answered, and without which they cannot be answered.” Understanding human imagination and how our belief system impacts our reality is incredibly important in being able to work with manifestation.

Excerpts and Quotes from Prayer The Art of Believing

Chapter One: Law of Reversibility

PRAYER is an art and requires practice. The first requirement is a controlled imagination. Parade and vain repetitions are foreign to prayer.

The essence of prayer is faith; but faith must be permeated with understanding to be given that active quality which it does not possess when standing alone.

Whether or not man succeeds in reversing the transformation of a force, he knows, nevertheless, that all transformations of force are reversible. If heat can produce mechanical motion, so mechanical motion can produce heat. If electricity produces magnetism, magnetism too can develop electric currents. If the voice can cause undulatory currents, so can such currents reproduce the voice, and so on. Cause and effect, energy and matter, action and reaction are the same and inter-convertible.

You should awaken within you the feeling that you are and have that which heretofore you desired to be and possess. This is easily done by contemplating the joy that would be yours were your objective an accomplished fact, so that you live and move and have your being in the feeling that your wish is realized.

Whatever you suggest with confidence is law to the subjective mind; it is under obligation to objectify that which you mentally affirm.

When you emerge from prayer you no longer seek, for you have—if you have prayed correctly—subconsciously assumed the reality of the state sought, and by the law of reversibility your subconscious must objectify that which it affirms.

Download The Free PDF Ebook of Neville Goddard Below