Want To Improve Circulation? Meditation Is The Answer 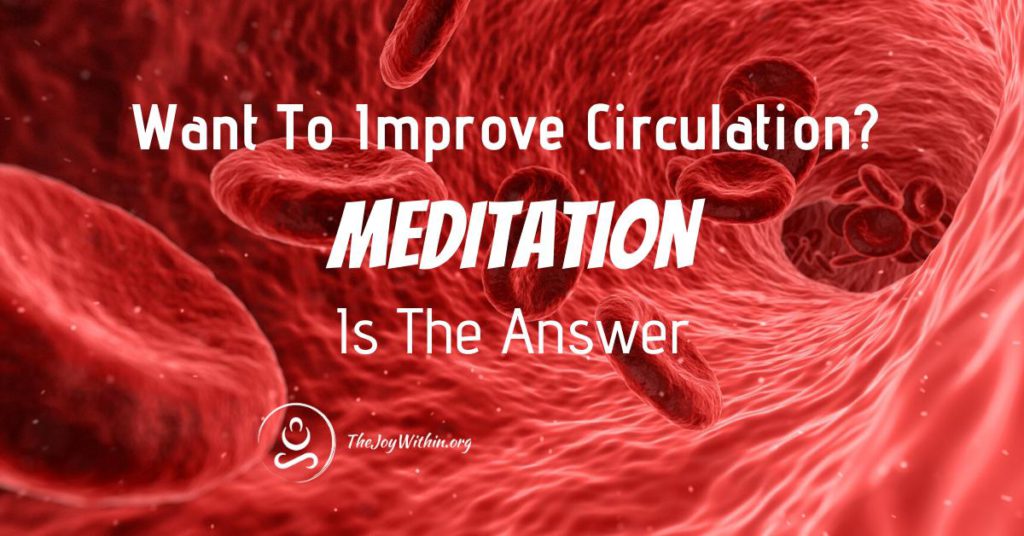 Meditation has been around for millenniums and we are just now studying the profound effects it has on the body that ancient yogis, Buddhist monks, and Zen masters have long since known. Within the numerous health benefits of meditation lies improving and boosting circulation.

What Role Does Circulation Play In The Body?

I’m sure you know that good circulation is necessary in order for a healthy body, but let’s dive into more of the ways circulation affects the body. First off, the circulatory system encompasses the heart and all of the blood vessels throughout the body.

The blood circulates through our veins and arteries in order to deliver nutrients and supply oxygen. At the same time, the circulatory system removes carbon dioxide from the body, as well as free radicals and waste products.

How Meditation Boosts The Circulatory System

Meditation impacts the circulatory system in a couple of different ways. The first way we will cover, is through releasing stress. In the body, stress is extremely detrimental to our health.

Stress and The Circulatory System

In the circulatory system, stress causes our heart to beat faster while hormones are released into the bloodstream. The blood vessels are constricted. Coronary artery disease is the leading cause of death in America and chronic stress greatly increases the risk for it.

Learn more about how meditation helps one overcome chronic stress.

A study led by a team at Massachusetts General Hospital and published in Psychiatry Research: Neuroimaging focused on the results of meditation and the brain’s grey matter. The study measured 16 brains of people who have never meditated before.

They were measured with MR images 2 weeks before beginning the eight-week mindfulness meditation program and as well as afterward. The participants meditated daily for an average of 27 minutes.

The results showed a reduction within the grey matter of the amygdala. The amygdala plays a big role in perceiving anxiety and stress and triggering the fight or flight mode.

It also impacted other parts of the brain such as an increase within the hippocampus which is related to learning and memory function. This goes to show that meditation can not only reduce stress physically within the body, but it can even rewire the brain.

Now through meditative focus and concentration, Tibetan monks are able to reduce blood pressure, slow the heart rate down, and lower body temperature through what is called Tummo meditation.

In his study, Tibetan monks practiced in about 4 degrees celsius conditions and placed sheets dripping with icy water on their naked bodies. They were able to not only dry the sheets but to make them steam by increasing circulation.

In these conditions, the average human would not be able to stop their body from shivering uncontrollably. Bensen measured the monk’s internal temperature and found the rectal temperature did not change but within the fingertips and toes found an increase of up to 8.3 degrees celsius.

Through meditation, they increased circulation which can also increase the libido. This is because there have been links to more intense orgasms coming from higher blood circulation in the genitals. This also includes erectile function and sexual arousal.

Learn more about meditation and increasing your libido here.

Ready To Improve Your Circulation?

If you are new to meditation or you have practiced a couple of times and are struggling to make it a daily practice check out our beginner meditation 30-day course.